October 15, 2021 1 min read
By using our website, you agree to the use of our cookies.
Learn more Got it!
> ONLINE TIPS > What’s The Difference Between A Firewall And A VPN? 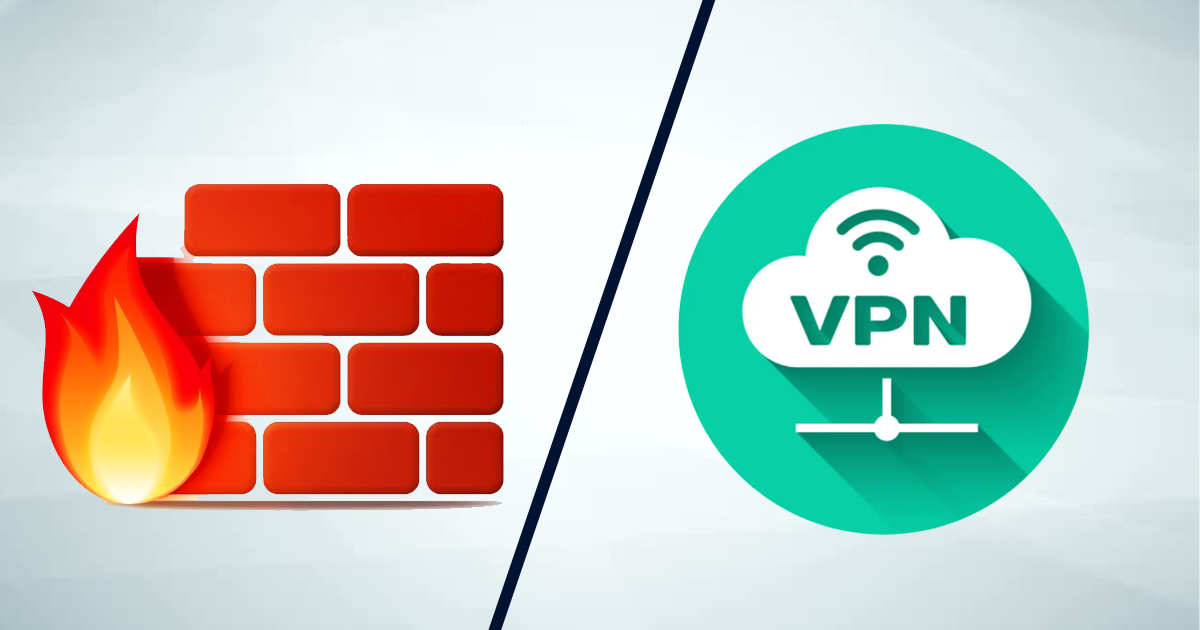 What’s The Difference Between A Firewall And A VPN?

Firewalls and VPNs are great tools to protect yourself from security issues on a network. As a general rule, a firewall protects an entry point to a network while a VPN secures the network flow between two points. Firewalls are configured with a set of rules to filter the traffic, where a VPN creates an encrypted tunnel between two networks. In this article, we’ll especially take a look at how firewalls and VPN differ.

A firewall is a system that provides network security by filtering incoming and outgoing network traffic based on a set of user-defined rules. In general, the purpose of a firewall is to reduce or eliminate the occurrence of unwanted network communications while allowing all legitimate communication to flow freely.

In most server infrastructures, firewalls provide an essential layer of security that, combined with other measures, prevent attackers from accessing your servers in malicious ways.

A firewall is simply a program or hardware device that filters the information coming through the Internet connection into your private network or computer system. If an incoming packet of information is flagged by the filters, it is not allowed through

Some common protocols that you can set firewall filters for include:

Packet filtering or stateless, firewalls work by inspecting individual packets in isolation. As such, they are unaware of the connection state and can only allow or deny packets based on individual packet headers.

Application firewalls go one step further by analyzing the data being transmitted, which allows network traffic to be matched against firewall rules that are specific to individual services or applications. These are also known as proxy-based firewalls.

A firewall is a specially programmed router that sits between a site and the rest of the network. It is a router in the sense that it is connected to two or more physical networks and it forwards packets from one network to another, but it also filters the packets that flow through it. A firewall allows the system administrator to implement a security policy in one centralized place. Filter-based firewalls are the simplest and most widely deployed type of firewall. They are configured with a table of addresses that characterize the packets they will and will not forward.

What is a VPN?

VPN stands for “Virtual Private Network” and describes the opportunity to establish a protected network connection when using public networks. VPNs encrypt your internet traffic and disguise your online identity. This makes it more difficult for third parties to track your activities online and steal data. The encryption takes place in real-time.

Why Do You Need A VPN Service?

Surfing the web or transacting on an unsecured Wi-Fi network means you could be exposing your private information and browsing habits. That’s why a virtual private network, better known as a VPN, should be a must for anyone concerned about their online security and privacy.

Think about all the times you’ve been on the go, reading emails while in line at the coffee shop, or checking your bank account while waiting at the doctor’s office. Unless you were logged into a private Wi-Fi network that requires a password, any data transmitted during your online session could be vulnerable to eavesdropping by strangers using the same network.

How A VPN Protects Your IP Address And Privacy

VPNs essentially create a data tunnel between your local network and an exit node in another location, which could be thousands of miles away, making it seem as if you’re in another place. This benefit allows online freedom, or the ability to access your favorite apps and websites while on the go.

Here’s a closer look at how a virtual private network works. VPNs use encryption to scramble data when it’s sent over a Wi-Fi network. Encryption makes the data unreadable. Data security is especially important when using a public Wi-Fi network because it prevents anyone else on the network from eavesdropping on your internet activity.

There’s another side to privacy. Without a VPN, your internet service provider can know your entire browsing history. With a VPN, your search history is hidden. That’s because your web activity will be associated with the VPN server’s IP address, not yours. A VPN service provider may have servers all over the world. That means your search activity could appear to originate at any one of them. Keep in mind, search engines also track your search history, but they’ll associate that information with an IP address that’s not yours. Again, your VPN will keep your online activity private.

The primary benefit of a VPN is its added security. When you’re at the coffee shop, you may immediately log on to the Web through the free Wi-Fi network with the shop’s name in it. But how do you know whether the free network is actually run by the coffee shop or by someone interested in stealing your data?

With a VPN, your data is encrypted for confidentiality on the remote, private server. Even if you’re accessing a Wi-Fi network that a cybercriminal has set up, your information still isn’t visible to them. You simply need to connect to your VPN program as the first step after logging on to an unsecured Internet server. It’s that easy.

Allows You to Search Blocked Sites

Residents of some countries can be blocked from popular websites like Facebook and Google, but people are still able to access these sites if they’re using a VPN. That’s because VPNs can connect to these services from private servers located in other countries that don’t block specific sites. Blocked sites are actually quite common; some small businesses and government agencies only allow traffic from their own countries as a security measure. This can prove problematic if you’re overseas on holiday and want to do some work.

By connecting to a VPN immediately upon accessing the Web in a foreign country, you’ll be able to browse as if you’re at home. Of course, you’ll want to be proactive and download or sign up for your VPN service before traveling abroad.

There are plenty of VPN companies popping up in the marketplace today, and not all of them can provide the services you need. Because we conduct so much shopping, emailing, and business using smartphones, it’s smart to find a VPN that can work on your phone as well. It’s more difficult for hackers to gather information from phones. But all you have to do is read an article about the Snowden leaks to know the government has no problem accessing your information.

READ
Here's How To Install Windows 11 On Unsupported CPUs

In general, VPNs work similarly for Apple products as they do for Windows or Android operating systems. However, VPN systems for iPhone actually require more robust protocols, providing you with that much more protection.

Unfortunately, not all VPNs are as safe and secure as you need them to be. It’s important that you research your VPN provider to ensure it offers customer service and accountability to answer questions and concerns. VPN providers typically prioritize certain features, and your priorities should align with those of the services you select. Search for a provider that offers 24/7 customer service, so you’re always able to get assistance if you encounter issues.

A secure VPN connection offers a powerful way to secure your online activity and safeguard your information. Not all VPN services and providers are created equal, however. It’s important to select a comprehensive, trustworthy service that meets your specific needs and gives you the freedom to browse the Internet confidently and securely.

Hers’s Why We Recommend ExpressVPN

ExpressVPN, which comes highly rated by users and reviewers, works on devices including Windows, Android, iOS, Linux, and routers. Based in the British Virgin Islands, it costs around $8.32 a month if you take out a 12-month plan. With a network of more than 2,000 servers in 94 countries, Express offers top-notch coverage in Europe and the US. It also works pretty well in Asia, South America, the Middle East, and Africa. It uses its own DNS servers and employs high-end encryption tech to ensure your security and privacy.

All that functionality could sound intimidating to VPN newbies, but ExpressVPN does more than most to help. An excellent support website is stuffed with detailed guides and tutorials to get you up and running. And if you do have any trouble, 24/7 live chat support is on hand to answer your questions.

Here are some specific differences between VPNs and firewalls:

A Hacker Group Is Selling 73.2 Million User Records From 11 Companies On The Dark Web