Home > FEATURED > Android 10 : Here’s Everything You Need To Know !

Android 10 officially out and everyone’s excited about the new features. Currently, the Android 10 is rolling in Pixel devices. There are privacy improvements, a new dark mode, and even a mechanism that will allow significant system updates to be installed through the Google Play Store, so there’s plenty to get excited about.

It’s chock-full of new features, has a renewed focus on privacy, and for the first time in Android history, doesn’t have a tasty dessert name to accompany it. That’s right. Android Q is officially called Android 10, and it’s bringing a lot of goodies to go along with it. Here’s are the top features of Android 10.

Since the first public version of Android, each OS update has been named using a popular dessert. Starting with 2005’s Android 1.5 Cupcake and ending with 2018’s Android 9 Pie, each version was given a dessert name corresponding the letter in the alphabet that was used as a codename during beta testing.

Google is officially done with dessert names and is instead shifting to a simpler numerical naming scheme. As such, Android Q’s official name is simply “Android 10.”

Android 10 ships with a system-wide dark theme that can be turned on and off at any time via a Quick Settings toggle. Even better, Google also created a new API that developers can use to have their apps go to a dark theme as well when the system-wide one is turned on.

It’ll likely take some time for all of your favorite apps to adopt the API, but right out of the gate, most Google apps and the main UI adhere to Android 10’s wonderful dark mode.

Back Button Is Gone

Google has finally gone all-in with gesture controls and has made a change that will likely split the community. The back button is gone. Instead of Android Pie’s navigation buttons, which was an elongated home button and a back arrow, there’s a thinner home button and nothing else. To go back, Android is opting to use the popular gesture found in many third-party apps — swiping from either the left or right edge of the screen to the center will act as the back button from now. You can adjust the sensitivity as to how hard or soft you have swipe to help avoid unnecessary activation.

Being able to customize our phones to the fullest extent is one of the things that makes Android so great, and with Android 10, Google is (kind of) giving users even more ways to tinker with the look of their device.Buried in the Developer Options of Android 10, there’s a new Theming section where you can change your phone’s accent color. 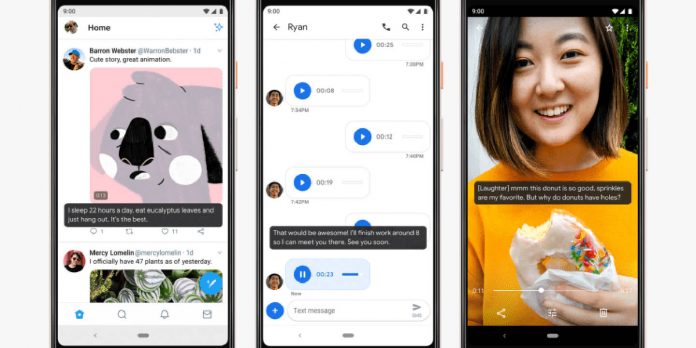 With Android 10, anytime you’re watching a video you can enable captions for it. Without the use of the internet, Android 10 can locally listen to the video and create real-time closed captions. This incredible feature is possible thanks to Google taking advantage of our phones’ local machine learning abilities to decipher languages. And this works across the OS including web content and third-party apps, not just Google-developed apps.

Privacy is a bigger concern than ever before, and with Android 10, Google is implementing some new features for app permissions to help give you a better understanding and more control over what exactly apps on your phone have access to.

Apps that ask for your location now reveal a new pop-up asking you if you want to grant location access all the time, only when the app’s being used, or not at all.

Gives users even more control over apps, controlling access to shared files. Users will be able to control apps’ access to the Photos and Videos or the Audio collections via new runtime permissions. For Downloads, apps must use the system file picker, which allows the user to decide which Download files the app can access.

Smart Reply will finally be available to all messaging apps in Android 10. The feature, which Gmail users have enjoyed since 2017, will leverage the same machine learning abilities included in smartphones to determine an appropriate response based on alert you receive on your phone. The reactions can even add emojis.

Additionally, Android can even predict your next move. For example, if someone sends you an address, one of the suggested replies will be to open Google Maps. With one button, you can immediately launch Google Maps to that address, saving you extra touches.

Because smartphone users are getting younger and younger, it’s essential for parents to be able to monitor how their kids are using their devices accurately. With Family Link, a kid’s phone can be reviewed right from a parent phone under the Digital Wellbeing option. Here you can review apps and approve which ones are on the phone, set daily limits to how long they use their phone, view how much time was spent in individual apps, and set a bedtime to force them off their phone

Android 10 supports the new TLS standard, 1.3. TLS is at the backbone of HTTPS security, providing encryption for all communication. TLS 1.3 is 40% faster than 1.2 while offering even more protection. This means not only when are your better protected but any data related communications (whether loading an app or using the browser) will be faster

We have seen both Samsung and Huawei add the ability to use Android in a desktop-like experience with either a dock or a cable, but it looks like they won’t be alone for long. A new setting in Developer Options known as “Force desktop mode” lets you connect your phone to an external monitor and interact with apps in freeform mode.

We have all been there. We changed the Wi-Fi password, and now everyone in our household is asking for the new password. You might have texted it to them in the past, but this is dangerous, as SMS is unencrypted and can be captured during transfer. Additionally, unless they delete the message off their phone (and you off your own), anyone with access to their text messages now has your password as well.

Android 10 fixes this by adding the ability to share your password using a QR code. These secure codes can be scanned by iPhone and Android users (even older Android versions), allowing them to instantly connect to the Wi-Fi network without ever knowing the password. This feature even requires authentication to execute (such as your fingerprint or passcode), protecting you in case someone takes your phone and tries to share this information. And for those who don’t have a QR code scanner, the plaintext password will appear below the QR code.

With 5G just around the corner, Android needs to get ready for the upcoming wave of 5G-supported devices and networks. Currently, there is no indicator for when your phone is using a 5G network. Android 10 includes connectivity APIs for apps to take advantage of the higher bandwidth connection includes the indicator when carriers turn on their networks.

For those who sideload apps, you are very familiar with the installation prompt. A mostly white page which had the name of the app and an installation bar showing the progress. You might have never thought about it, but there is a lot of wasted space there.

Apparently, the Android team agreed and changed it for Android 10. Now, instead of a full page, a popup appears showing the same information. While it isn’t a huge change, it is a much cleaner experience.

Facebook Dating Is Now Available in the US | Here's Everything You Need To Know !