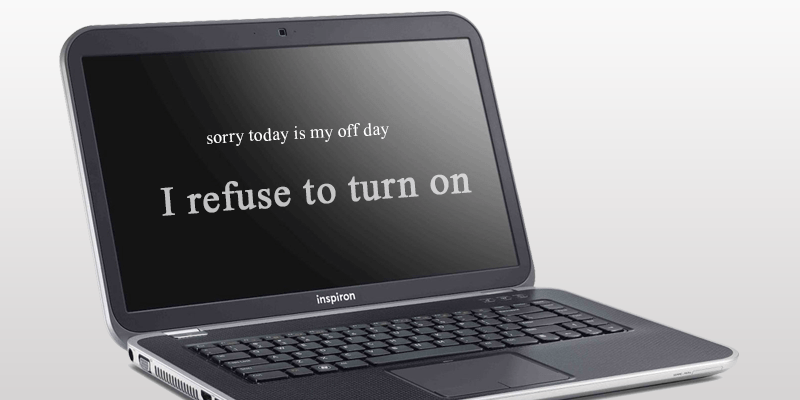 Among the many ways that a computer won’t turn on, a complete loss of power is rarely the worst case scenario. There is the chance that your PC isn’t receiving power because of a serious issue, but it’s unlikely. There are several possible reasons why a desktop, laptop, or tablet computer might not power on, so it’s very important that you step through a complete troubleshooting procedure like the one we’ve outlined below.

How to Fix a Computer That Shows No Sign of Power

Before starting a sometimes time-consuming troubleshooting process, make sure you’ve turned on every power switch and power button involved in your computer system:

Check for disconnected computer power cable connections. A loose or unplugged power cable is one of the top reasons why a computer won’t turn on.

Laptop & Tablet Tip: Even though your computer runs on a battery, you should make sure that the AC adapter is plugged in properly, at least during troubleshooting. If you regularly keep your computer plugged in, but it has wiggled loose and now the battery is empty, your computer may not be getting power for this reason.

Plug your tablet, laptop, or desktop directly into the wall if it’s not already. In other words, remove any power strips, battery backups, or other power distribution devices between your PC and the wall outlet. If your computer starts getting power after doing this, it means that something that you removed from the equation is the cause of the problem, so you’ll likely need to replace your surge protector or other power distribution devices. Even if nothing improves, continue troubleshooting with the computer plugged into the wall to keep things simple.

Perform a “lamp test” to verify power is being provided from the wall. Your computer isn’t going to turn on if it’s not getting power, so you need to make sure that the power source is working properly.

Note: I don’t recommend testing an outlet with a multimeter. Sometimes a tripped breaker can leak just enough power to show proper voltage on the meter, leaving you with the assumption that your power is working. Putting a real “load” on the outlet, like a lamp, is a better option.

Verify that the power supply voltage switch is set correctly if you’re on a desktop. If the input voltage for the power supply unit (PSU) does not match the correct setting for your country, your computer may not power on at all. Remove the main battery in the laptop or tablet and try using AC power only. Yes, it’s perfectly fine to run your portable computer without the battery installed. If your computer turns on after trying this, it means that your battery is the cause of the problem and you should replace it. Until you get it replaced, feel free to use your computer, so long as you’re close to a power outlet!

Carefully inspect the power receptacle on the laptop or tablet for damage. Check for broken/bent pins and bits of debris that might be preventing the computer from getting power and charging the battery.

Note: Aside from straitening a bent pin or cleaning out some dirt, you’ll probably need to seek the services of a professional computer repair service to correct any major problems you see here. Be sure to remove the laptop’s internal battery to avoid the risk of shock if you work on this yourself.

Replace the CMOS battery, especially if your computer is more than a few years old or has spent a lot of time turned off or with the main battery removed. Believe it or not, a bad CMOS battery is a relatively common cause of a computer that looks like it’s not receiving power. A new CMOS battery will cost you well under $10 USD and can be picked up just about anywhere that sells batteries. Make sure the power switch is connected to the motherboard if you’re using a desktop. This is not a very common point of failure, but your PC might not be turning on because the power button isn’t properly connected to the motherboard.

Tip: Most case switches are connected to the motherboard via a red and black twisted pair of wires. If these wires aren’t securely connected or aren’t connected at all, this is probably the cause of your computer not turning on. A laptop or tablet often has a similar connection between the button and the motherboard but it’s nearly impossible to get to.

Test your power supply if you’re using a desktop PC. At this point in your troubleshooting, at least for you desktop folks, it’s very likely that the power supply unit in your computer is no longer working and should be replaced. You should, however, test it just to be sure. There’s no reason to replace a working piece of hardware when testing it is fairly easy.

Exception: An ozone smell or very high pitched noise, combined with no power at all in the computer, is an almost certain indication that the power supply is bad. Unplug your computer immediately and skip the testing.

Replace your power supply if it fails your testing or you experience the symptoms I just described. After replacement, keep the computer plugged in for 5 minutes before starting so the CMOS battery has time to recharge.

Important: In the majority of cases when a desktop computer isn’t receiving power, a nonworking power supply is to blame. I bring this up again to help stress that this troubleshooting step should not be skipped. The next few causes to consider aren’t nearly as common.

Test the power button on the front of your computer’s case and replace it if it fails your testing. This goes for desktop computers only.

Tip: Depending on how your computer’s case is designed, you may be able to use the reset button in the meantime to power on your PC.

Tip: Some motherboards have tiny power buttons built into the boards themselves, providing an easier way to test the case’s power button. If your motherboard has this, and it works to power on your computer, the case power button probably needs to be replaced.

Replace your motherboard if you’re using a desktop. If you’re confident that your wall power, power supply, and power button are working, it’s likely that there is a problem with your PC’s motherboard and it should be replaced.

Note: While perfectly doable by anyone with some patience, replacing a motherboard is rarely a quick, easy, or inexpensive task. Be sure you’ve exhausted all of the other troubleshooting advice I’ve given above before replacing your motherboard.

Note: I highly recommend that you test your computer with a Power On Self Test card to confirm that the motherboard is the cause of your computer not turning on at all.

Important: Replacing the motherboard is probably the right course of action at this point with a laptop or tablet as well, but motherboards in these types of computers are very rarely user replaceable. The next best course of action for you is to seek professional computer service.