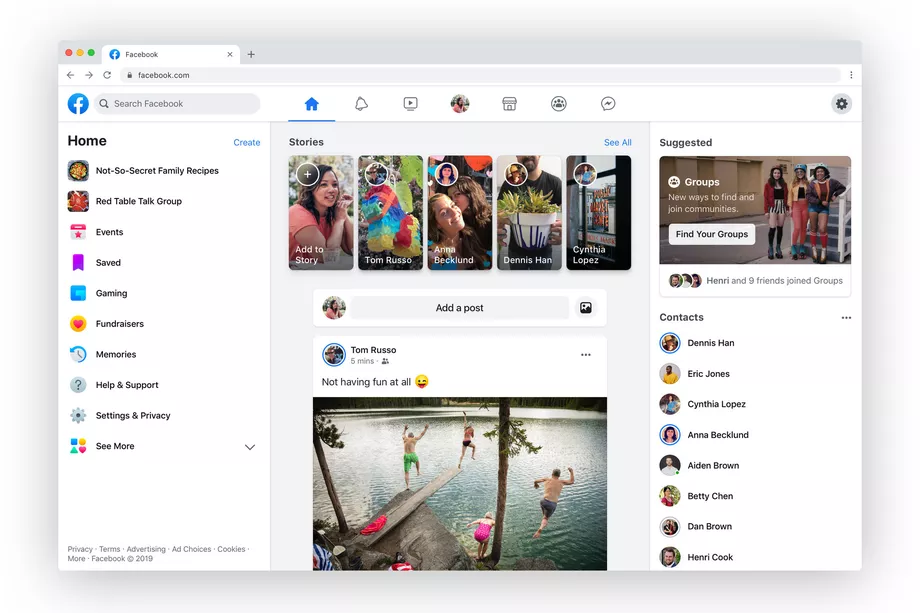 Facebook is rolling out the new web interface to its users. For the past few days, Many users have reported that they got prompted by Facebook to try out the new interface. After accepting, they get asked if they’d like to use the white or dark layout. The choice is also available under the quick settings accessible from the top right avatar.

Facebook says the mobile redesign will start rolling out immediately on iOS and Android around the world. It’s also working on a desktop redesign that will arrive in the coming months. The biggest change to note is the new groups tab that’s now placed in the middle row of the redesigned menu bar. When tapping in, users will now get a personalized feed of updates from their various groups as well as recommendations to join new groups based on their interests.

“There are tens of millions of active groups on Facebook. When people find the right one, it often becomes the most meaningful part of how they use Facebook. And today, more than 400 million people on Facebook belong to a group that they find meaningful,” the company said in a blog post. “With this in mind, we’re rolling out a fresh new design for Facebook that’s simpler and puts your communities at the center. We’re also introducing new tools that will help make it easier for you to discover and engage with groups of people who share your interests.”

If you don’t get prompted by Facebook’s website to try the new look, there doesn’t seem to be any workaround to force-trigger it just yet.

READ
Netflix Will Now Automatically Download Series Or Movies On Your Mobile Device Based On Your Taste
FEATURED, IT NEWS & UPDATES

WordPress To Get A Built-In XML Sitemap Feature