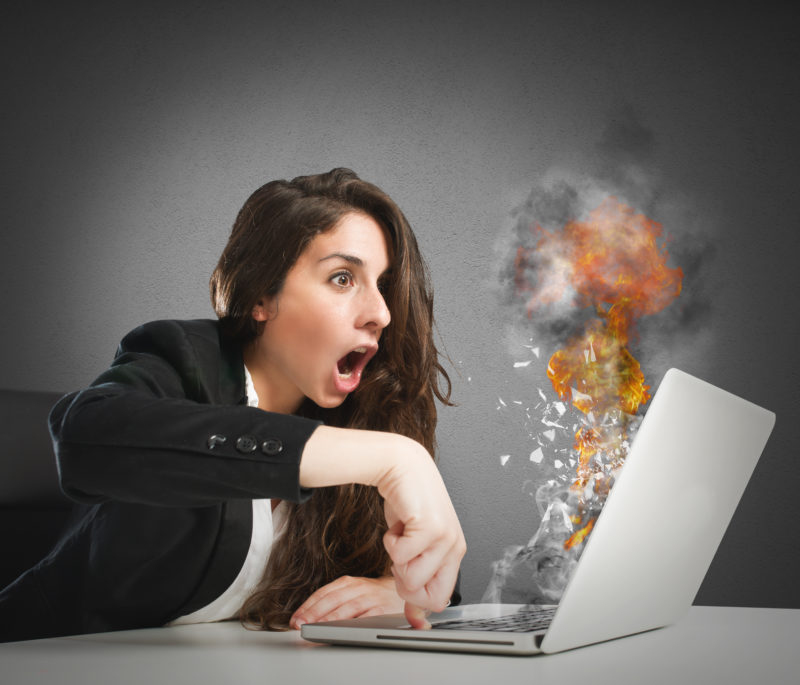 Laptops are unfortunately prone to overheating. Unlike desktop PCs, a laptop’s hardware components are in close proximity to each other with little room for air movement.Plus, as a computer gets older, the components work less efficiently and can overheat easier. Also with time is the unfortunate fact that the inside of the case collects dust and other debris from the surroundings, which if left uncleaned, can force the fan and other parts to overwork.

The current trend towards miniaturization – stuffing faster processors into ever smaller cases – is also increasing the potential for laptops to overheat. In fact, researchers who are trying to solve the problem with nano electronics are predicting that if this continues, laptops will be as hot as the sun in a decade or two.

In other words, hot laptops are a real problem!

Even if it isn’t running at 6,000 degrees Celsius, if your laptop overheats, it can do some serious damage to both your body and the internal hardware. A laptop that’s too hot can actually scald you. Sony recalled thousands of VAIO laptops due to possible burn hazards. There’s also some indication that working with a hot laptop in your lap, where they were designed to be, can potentially cause male infertility. Regarding the device itself, operating a laptop at very high temperatures leads to failed hardware components (video cards, motherboards, memory modules, hard drives and more are susceptible to damage) and decreases the lifespan of your computer.

It can also be a fire hazard; faulty laptops have actually burned down houses.

So, what’s the difference between an overheating laptop and one that’s just a little hot? What about using laptop when it’s hot outside – is that okay? It’s important in any scenario to keep a watchful eye on what a hot laptop looks and feels like.If your laptop feels hot and shows any of the problems below, chances are it’s overheating or getting there:

Note: Some of these signs just indicate slow or outdated software. For instance, a computer that has problems running certain applications doesn’t necessarily mean that it’s too hot, especially if it doesn’t even feel hot to the touch.

How to Test the Internal Temperature of Your Laptop

If your laptop is just plain hot, find out if it’s running too hot by using a free program to check the internal laptop temperature and find its optimal temperature.

Some system information tools support temperature readings too. On that note, having one of those programs on your computer has the added benefit of letting you check up other stats about your computer and not just the temperature of the internal components.

What to Do When a Laptop Gets Too Hot

There are a number of things you can do to address an overheating laptop. Here are some suggestions:

4 THINGS YOU SHOULD NEVER GOOGLE!