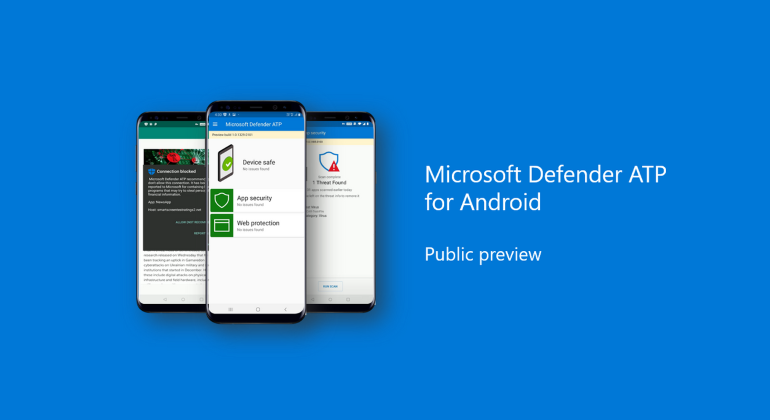 The tech giant Microsoft is launching a preview version of its antivirus software for Android today. The product, named “Microsoft Defender ATP for Android,” was announced at the RSA security conference in February this year, and has reached a first public preview today.

This new Android app will work like a classic mobile antivirus product that can scan the phone for malicious apps and other malware, detect malicious and phishing sites while the user is browsing the web, and block users from accessing certain sites based on a predefined block-list.

Microsoft says the Defender ATP for Android app also comes with hidden features, courtesy of its integration into the larger and more complex Defender ATP, Intune, and Configuration Manager platforms.

The app effectively works as a gatekeeper for a company’s network, allowing IT staff to lock Android smartphones out of the corporate network or prevent users from accessing corporate apps.

According to Microsoft, “Phishing is one of the biggest threat vectors on mobile, with the majority of attacks happening outside of email such as via phishing sites, messaging apps, games, and other applications. Other potential threats come from apps which may make connections to unsafe domains, unknowingly to the user and security teams. Web protection capabilities in Microsoft Defender ATP for Android help to address these challenges with:

“When Microsoft Defender ATP for Android finds that a device has malicious apps installed, it will classify the device as ‘high risk’ and will flag it in the Microsoft Defender Security Center,” Kanishka Srivastava, Senior Program Manager at Microsoft, said today.

8 Things You Must Do Immediately After Losing Your Smartphone

Essential Steps for Protecting Your Identity Online In 2021