Home > GADGETS > How To Find Hidden Cameras In Your Hotel Room 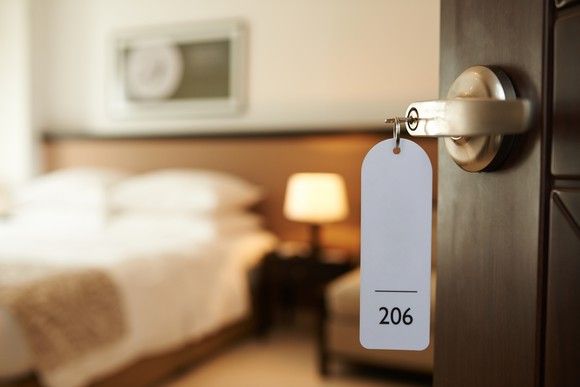 If you are staying in a hotel, the last thing you want to think about is that someone may be spying on you. There’s always a need to be alert and mindful in today’s world, and doing so can increase awareness and personal safety. Unfortunately, there have been a lot of incidents where a hidden camera is found inside restrooms, hotels, and it’s happening more often than ever.

Do you worry about there being hidden cameras set up in hotel rooms and vacation rentals when you stay in them? If so, there are some steps you can take to check these places for hidden cameras before you settle in.

You should always conduct a quick visual inspection to see if you can spot any signs of small hidden cameras. Look for pieces of furniture or appliances that are in unusual places. Check whether they are point to your bed or not.

The best hidden cameras on the market today are the ones that can blend into almost any room. It’s not uncommon at all to find cameras hidden inside of:

Walk around in your hotel room or vacation rental and visually inspect all of the items we just mentioned as well as anything else that you might find.

Hotel guests should look for anything in the room that appears abnormal. Small holes in the walls or other objects; random wires in unexpected places; and any blinking or flashing lights are all good indicators a camera might be hidden somewhere in your room.

Perfect for AirBNB, Hotels, and Restrooms, Scout Hidden Camera Finder is one tiny device that can detect a hidden camera near you. No matter if it’s a CCTV or a regular camera, Scout can find it with ease because of its LED-powered technology.

It is also straightforward to use. Follow the below steps whenever you want to detect a hidden camera with this device:

1. Stand 5-15 feet directly in front of the item you think may be concealing a hidden camera.

2. With the LEDs pointing away from you, hold Scout up against your eye so you can look through the aperture.

3. Use the button on Scout to turn the LEDs on. There are two settings – solid and flashing. Most people prefer the flashing option.

4. Look through the aperture of Scout towards the suspected hidden camera. If you see a red pinpoint of light shining back at you, you may have found a hidden camera.

Use Your Smart Phones

You can easily find hidden cameras using your iPhone or Android smartphones even without detectors. Make a phone call with your friends or family. Then, Walk around your room. Hidden surveillance normally would give off a special radio frequency that would interfere with your phone call signal. If you notice that there is signal interference in a specific place or position, stop and check this place carefully to find out whether there is a hidden security camera there.

If your finger and the image touch tip to tip, there would be a hidden spy camera in the mirror. You can also use this trick to know whether there are hidden cameras in your hotel rooms when you travel.

A straightforward way to detect hidden cameras is using the flashlight (works best in dark conditions). Turn on the flashlight and turn off the lights in your room. Pan the flashlight around the room. Go slowly and examine any suspicious positions from different angles. If you notice any reflective lights from an object, there might be a hidden camera there.

4 Ways to Find WiFi Passwords on iPhone and iPad